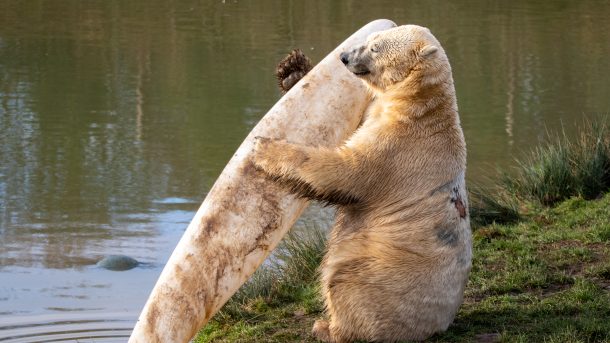 This past weekend a small group of KKC members visited Yorkshire Wildlife Park. KKC had previously donated a boat as a toy for the polar bears and we were there to witness it’s introduction.

Whether the bears are trained to answer to their names or the sight of a new toy was the attraction is unclear. However once Sisu and Luka were called they came bounding across from where they had been eating to the spot the keeper intended dropping it over the fence into their large enclosure. No sooner did it land than ‘Sisu’, the larger of the bears, picked it up and started to play with it both in and out of the water. The bear was amazingly strong and even full of water he lifted it easily with one paw. After a short while both bears started playing with it together, however it wasn’t long before the boat could no longer stand the pressure of those teeth and paws.

All the spectators were astounded at how quickly a polar bear could destroy a normally very durable craft. The keeper explained that the boats usually last a little longer and that when the enclosure was unoccupied they would remove the debris. They had also discovered that the boat ends made ideal suspended polar bear treat dispensers.

What's the furthest away from Hull that you've paddled? If you have an image or video share below with the location.

We are back to some regular paddling
session. We have negotiated paddling sessions at Welton
Waters, Wednesdays 18:00 to 19:30. These are open to
everyone; beginners to advanced paddlers.

Book your place via our Events Portal - Link in our bio

Check out our latest video from our trip to the Ure - Low Flow Ure | Mickley to Sleningford Mill low water trip
https://youtu.be/rZXE7UJ0kJ8